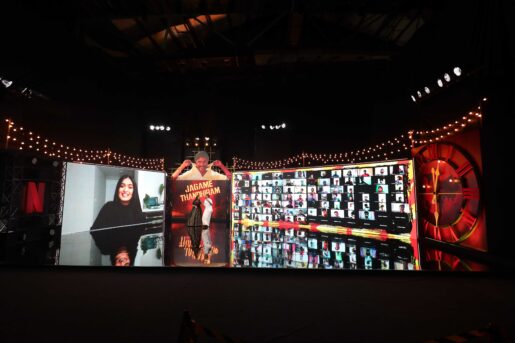 Thursday, June 17, 2021:  The wait is finally over! Fans have been rakita-ing in anticipation for Suruli and his gang to take the screens by storm- and the crew is finally here. Counting down to the global launch of the much anticipated Jagame Thandhiram, Netflix had something special brewing for film enthusiasts worldwide. Ahead of its release, Netflix hosted the ultimate global fan event – “The Konga’s Kootam” – a blockbuster event that gave fans a deep dive into the world of Jagame Thandhiram.

Fans from around the world tuned into the virtual gala, with director Karthik Subbaraj and actors Aishwarya Lekshmi, Kalaiyarasan, Sharath Ravi and Deepak Paramesh, who indulged in a ton of banter, and engaging conversations. That’s not all – the event also had power packed appearances from Santhosh Narayanan, Dhee and Master Sherif.

Headlined by powerhouses Kiki Vijay and Mirchi Vijay, the hosts kept the excitement levels high as they brought fans closer to their favorite stars. The Kongas Kootam kicked off with a heartfelt address by the director, who thanked his fans for being there through every step of his journey.  Fueling the Jagame fever, Aishwarya Lekshmi graced the screens and shared interesting anecdotes from her filming experience in the streets of London. Soon after, we saw the screens hijacked (in the best possible way) by the renowned influencer Niharika NM – who auditioned live for the role of Suruli. The highlight of the Kongas Kootam was an adorable performance choreographed by Master Sherif- who made everyone’s favourite cricketer, Ravichandran Ashwin dance to his tunes. Saving the best for the last, a melodious rendition of hit song ‘Bujji’ was sung by none other than Santhosh Narayanan.

Read Also  Music Director Santhosh Narayanan : “Dhanush was a mentor for the songs of Jagame Thandhiram”.

The event concluded with a sneak peek video into everything that went down behind the sambhavams from the sets of Jagame Thandhiram.

Answering a question from the crowd, Karthik Subbaraj said: “The experience of working with each and every person from the cast and crew has been unreal – and after years of hardwork – Jagame Thandhiram, a project is so close to my heart, is releasing in 190 countries. I’m grateful for all the support that fans have been pouring in and I hope  audiences around all over the world thoroughly enjoy the film”

About Netflix:
Netflix is the world’s leading streaming entertainment service with over 208 million paid memberships in over 190 countries enjoying TV series, documentaries and feature films across a wide variety of genres and languages. Members can watch as much as they want, anytime, anywhere, on any internet-connected screen. Members can play, pause and resume watching, all without commercials or commitments.

For the latest news, updates and entertainment from Netflix India, follow us on IG @Netflix_IN, TW @NetflixIndia and FB @NetflixIndia

Music Director Santhosh Narayanan : “Dhanush was a mentor for the songs of Jagame Thandhiram”.