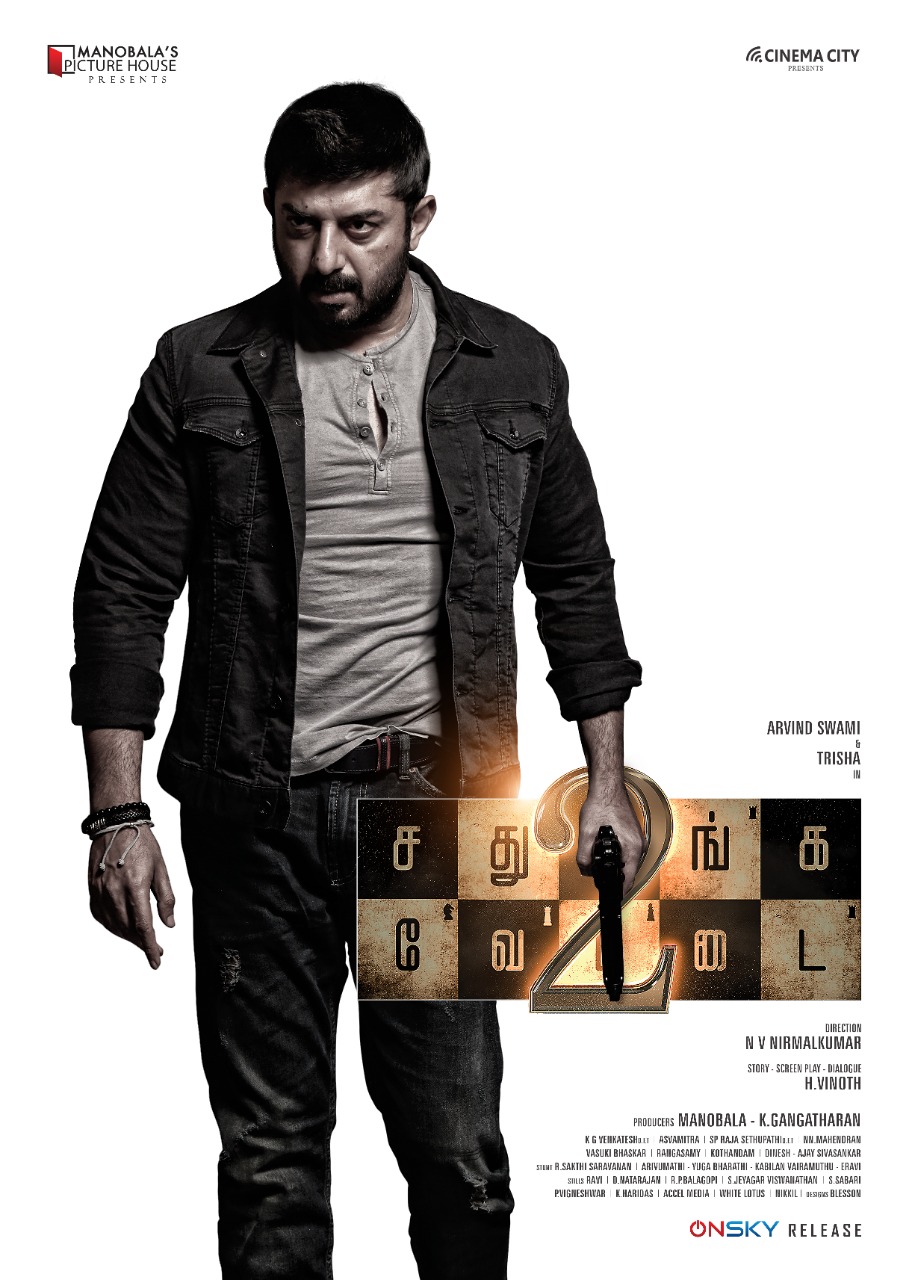 Here’s the Word!!! Sathuranka Vettai 2 is back to steal the spotlights!! Gears up for world wide theatrical release on Janaury 22.

When an individual embarks on a venture with strong vision, the results are sure to touch the pinnacle of success, thereby elevating the stature of respective industry. This looks strong enough evident with MR.MOUTTOU SAMBANDAM of Onsky Technology Pvt. Ltd, who recently kick-started his journey as a producer in the Tamil movie industry. While his maiden production “2030”, a first-of-its-kind Flash Forward genre movie is proceeding at brisk pace, he has now come up with good news for the film buffs, especially the ardent lovers of ‘Sathuranka Vettai’ franchise. Yes, he has now acquired the rights of Sathuranka Vettai 2 featuring Arvind Swami and Trisha in the lead roles. Written by H. Vinoth (Director of Valimai, Nerkonda Paarvai, Theeran Adhigaaram Ondru and Sathuranka Vettai), the film is directed by NV Nirmal Kumar (Vijay Antony Salim fame) and is produced by Manobala Picture House and Cinema City.

Mr. Mouttou Sambandam, Onsky Technology Pvt. Ltd, says, “Basically, I am a diehard film buff, and vigorously watch almost all the movies without missing them. Sathuranka Vettai is one among the best films, which I would mention in the Indian film panorama. When I heard about the new movie coming out from this franchise of Sathuranka Vettai, I was so much excited and enthralled about its arrival. Especially, after watching the visual promos with the performance of top league actors like Arvind Swami and Trisha, I could feel the elevation of this franchise. However, I was suddenly let down to see the movie getting stranded at various stages due to unforeseen circumstances. When I ventured into the film production, I strongly desired not only about producing content-driven movies alone, but pick the best projects that have the potential to steal the spotlights behind the linguistic barriers and boundaries, but isolated from seeing its release due to some reasons. Eventually, what incessantly kept striking my attention was this movie – Sathuranka Vettai 2. And now, I am glad that I was able to get my vision materialized by choosing this project. Thanks to Manobala sir, Cinema City Gangadharan and many other noble souls, who were willing to see the film gets released. I earnestly thank them for having given me an opportunity to explore my potentials. Special thanks to Aravind swamy sir for his cooperation to secure the release of this film. There’s a famous saying – Right Thing at the Right Time and Right Place. I am emotional and elated to see it happen with SV2. When I watched the glimpses, I could easily sense that it has elements that will amuse audiences and win the critical acclaims as well. Now, the pending works have resumed and we are eyeing for a worldwide theatrical release for January 2022.”

“Talaivi” will be released in Tamil, Telugu and Hindi theaters across the world from September 10.