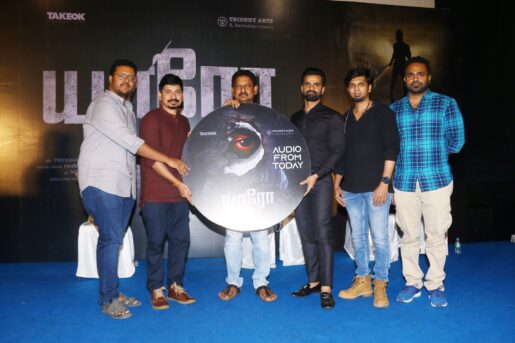 YAARO is an upcoming Tamil Horror-Psycho-Thriller movie featuring newcomers in the lead roles, produced by Venkat Reddy of TAKEOK PRODUCTIONS and directed by Sandeep Sai. Yaaro is an edge of the seat Thriller that will have a pattern set against the backdrops of a murder mystery. Trident Arts R Ravindran who is far-famed for choosing content-driven projects is presenting this film. Venkat is debuting in the lead role with this movie. With the post production work completely wrapped up and the movie all set for the worldwide theatrical release, the press meet was held yesterday (January 24, 2022). The occasion was graced by eminent personalities in the film industry along with the cast and crew members of Yaaro.

Trident Arts R Ravindran said, “Yaaro is the complete vision of Venkat, IT personnel in USA, who came all the way here to accomplish his passion for movies. I have already watched the film, and it’s pretty impressive. Director Sandeep Sai has done a commendable directorial.  We are releasing this film on February 4, 2022 in the theaters. I am sure that audiences will love this film and appreciate it.”

Director Sandeep Sai said, “Myself and Venkat were colleagues in the office, and both of us always used to share our insatiable passion for cinema. After quitting the job, I made a short film. Soon after watching it, Venkat admitted that we together will work in a full-length feature movie. He has done this film with his complete heart and soul. I owe a lot to my team for rendering a beautiful output with their utmost dedication. Music director Jose Franklin’s score is going to be the pillar of this film, and I can openly state that if not for him, this film would have not achieved such a decorous output. Cinematographer Prabhu has brought forth impeccably colossal visual outputs. When we started crafting this script, we wanted to make sure that it has lots of surprises and fresh elements from the beginning till the end. Audience will experience the freshness while watching the film. Editor Anil Krishnan’s sophisticated and unique editing style has pushed Yaaro to international standards. I thank Venkat for accepting this offer as many wouldn’t bank their trust on a new-fangled concept like this movie. I am looking forward to a complete support from the press-media friends and the audiences.”

Cinematographer KB Prabhu said, “I embarked on my journey in the mainstream cinema after working in short films. I have already completed another bilingual movie as cinematography. I was introduced to director Sandeep through my editor. We have made a good project with good team work. I request everyone to extend their support towards this film.”

Editor Anil Krish said, “We youngsters have made this film with complete hope and faith on audiences that they will welcome projects with good and fresh contents. I have been desperately waiting for the film’s release, and am glad to see it happen through the Midas-touch of R Ravindran sir of Trident Arts. I have been traveling with this project from the process of script writing. We have tried processing this narration with non-linear editing. We have given our best into the project, and I am sure everyone will like this movie.”

Music director Jose Franklin said, “Erstwhile to Yaaro, I had composed music for the film ‘Nedunal Vaadai’, and received good reception for the musical score. This is my second movie. I and Sandeep have shared a friendship for 10 years. We have worked a lot for the best background score than songs. This is a new-fangled thriller that will be liked by audiences from all walks of life.”

Producer-actor Venkat Reddy said, “I extend my earnest thanks to producer Ravindran sir for trusting this project. He has been a great mentor to me in educating the process of getting it released. He is the sole reason behind the film’s release. When we decided to get-go with the shooting, we had faced lots of challenges. Finally, we have managed to accomplish our dream project. We wanted a perfect cinematographer to handle this project as visuals are the major element in escalating the script value. It was disappointed to hear many leading cinematographers reject our offers due to non-banner. Finally, we met Prabhu, who was passionate about cinema. Editor Anil is the pillar for this film. Whenever we were perplexed, we would approach to get it resolved. Music director Jose has given the best music, and we had thrust more pressure upon them. In “Yaaro’s journey Sandeep and myself had many disagreements and disputations, but at the end of the day, it was all for the sake of nurturing this project with complete perfection. He has given a commendable role in this movie, and I am sure, not all actors will get such characterizations.  I am glad to have got this opportunity in the first movie itself. Actress Upasana has done a role that many had rejected as it involved lots of challenges. I thank everyone from bottom of my heart for their support towards making this film a good one. I am requesting everyone to support this movie.”