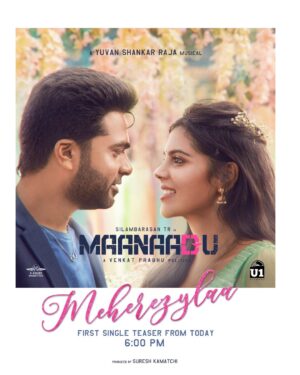 After the bagging the audio rights of Silambarasarn TR ‘s Maanadu, U1 records is all set to launch the first single titled “Meherzylaa” on 21st of june.

The song is said to be a Peppy number composed and sung by U1(Yuvan) along with his sister Bhavadharani. The Lyrics have been penned by Madhan Karky.

The movie will release soon and has a very high expectation from the public as STR has a new look and has worked hard to build his physique. Kollywood audience love a strong political drama and adding Yuvan’s BGM to the equation, the film is sure to be a massive crowd puller.

Prominent characters in the movie will be played by Kalyani Priyadarhsan, SA Chandrasekhar, SJ Suryah, Premji Amaren, and Manoj. The music is of course by Yuvan which is a no-brainer looking at the crew and casting.

Fans of Yuvan can’t wait to see Simbu in a political thriller film with Yuvan’s music in the background giving the history of U1 & STR combo. We are sure his music has made the movie that much stronger.

First single track “What a Life-U” from “TRIP” released.