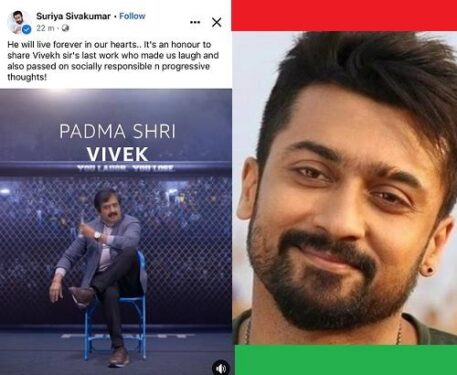 ~A celebrated legend of the Tamil film industry, Padma Shri Vivek will be seen in

National, August 13, 2021: As an emotional tribute to Padma Shri Actor and Comedian late Vivek, Superstar Suriya and Amazon Prime Video shared a video in memory of the comedy stalwart of the Tamil film industry. The actor dons the role of a judge on Amazon Prime Video’s upcoming Original comedy reality show ‘LOL: Enga Siri Paappom’. The video pays homage to him and captures him in his trademark style – full of laughter, quirk and witty jokes.

Suriya who has worked with Vivek in multiple blockbuster movies such as Singam 1 & 2, Maattrraan, Perazhagan among many others, took to social media to share the tribute video and penned a heartfelt message for his late colleague saying that he will always be missed and will live forever in our hearts. He went on to say that he is honored to share Vivek Sir’s last work with fans.

Fondly referring to him as ‘Chinna Kalaivanar’, the video pays respect to the actor who made audiences laugh and entertained them for decades. The tribute video vividly captures his journey in LOL: Enga Siri Paappom and features him in his signature swag and style that he has always been known for. The video ends on a touching note, resonating the wishes of fans all over, saying ‘Ungal sirippu endrum olikkattum’. (May his laughter echo on forever).

‘LOL: Enga Siri Paappom’ was Actor Vivek’s last project in the comedy reality space where he played host and referee along with noted actor Shiva and interacted closely with ten comedy entertainers from the Tamil film industry.

‘LOL: Enga Siri Paappom’ is an unscripted reality show which will launch on Amazon Prime video starting August 27th. It features 10 comedians and entertainers including Maya S Krishnan, Abhishek Kumar, Premgi Amaren, Harathi Ganesh, RJ Vignesh Kanth, Sathish, Pugazh, Powerstar Srinivasan, Baggy (Bhargav Ramakrishnan), and Syama Harini pitted against each other under the same roof under the vigilant eye of the two host- Late Vivek and Shiva. The ten contestants will be competing against each other for six consecutive hours with two objectives- to make others in the house laugh and ensure that they do not laugh themselves. There is however only one simple rule – you laugh, you lose! The last one standing gets the title and takes home a whopping cash prize of INR 25 Lakh.

Ahead Of The Highly-Anticipated Drishyam 2, Amazon Prime Video takes fans down memory lane.