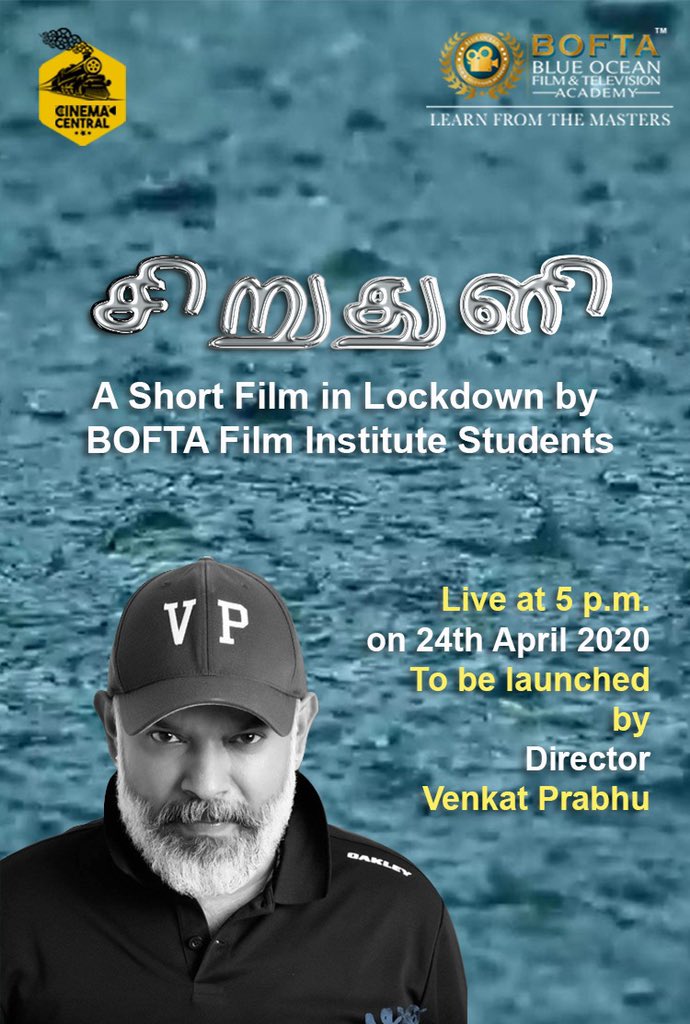 Director Venkat Prabhu released a short film made by BOFTA Film Institute Students today, which was made by the students under the mentorship of Director Sasi of recent hit film ‘Sivappu Manjal Pachai’.

The short film titled ‘Siru Thuli’, based on real life incidents, talks about the need to contribute to humanity under this trying circumstances due to Corona Lockdown with lakhs of families having lost their livelihood. How each individual can contribute in his own way and support underprivileged is the core theme of the short film.
Though the educational institutes were closed from 16th March 2020, BOFTA Film Institute switched over to Online education of their students and since the lock down, is conducting classes online to its students and continuing its education. Directors Cheran, Sasi, Cheran, Cinematographers Mahesh Muthuswamy, A. Ramesh Kumar, CJ. Rajkumar and Producer-Director G. Dhananjayan are conducting regular classes to students. In addition, many guest faculties are coming online and teaching BOFTA Students on various topics, thus ensuring students do not miss out the learning during this lockdown time.
As a part of the learning, this short film idea was conceived by G. Dhananjayan, which is developed and written by Direction student Kavin Chakravarthy and the film was made by all the students namely Anantha Raja, Aswin Nair, Anbu Chelvan, Arun Balaji, Emmanuel, Nithesh Kanna, Paranthaman, Pavetra, Pranav Kannan and Ranjith together. The film was edited by JS. Vigneshan. The short film was shot using their mobile phones by the students without the support of any light or sound equipment. They themselves acted or added their family into the film and developed the core idea into a full-fledged story.
This short film is a presentation on how without technology or the support of many, a short film can be made intelligently by students on the theme of Staying Human and spreading humanity. This short film making together by all the students, also helped them to understand the need to work together to succeed in their career and filmmaking.
The short film is available for viewing from 24th April 2020.

ABOUT BOFTA FILM INSTITUTE:
BOFTA Film Institute is Tamil Nadu’s Premiere Film Institute, offering One Year Diploma Courses in Screenplay Writing and Direction, Cinematography and Editing. BOFTA is the first film institute in the country to offer education from Masters of the film industry and ensures students Learn from Masters there. Since the commencement of its service in 2016, the film institute consistently delivered high quality education to students, which led talented students entering the film industry. BOFTA is the First Film Institute to offer University recognized Diploma Courses, by tying up with Manomaniam Sundarnar University and offering their Diploma to their students.
Today, after four batches of students having been passed out, BOFTA is proud that its alumni is working in various capacities in the art of filmmaking and many of them are expected to turn to be independent filmmakers or technician soon.

Happy to release @BOFTAIndia Students' Short Film #SiruThuli made in this Lockdown, shot in their mobiles, with no other support, made under the guidance of Director #Sasi. Watched the film & loved it. Good job guys. Here it is https://t.co/DW7DYkUzyg 👍👍👍

Dharala Prabhu Movie will be back on the screens.