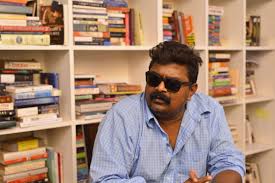 Filmmaker Mysskin’s long allegiance to the film industry has found him immense popularity.

Despite the commercial success of his films which are also the most inspiring ‘case studies’ in film schools and institutions, the multi-faceted icon has now kept his word to support ‘Baaram’ in an incredible gesture of generosity for the National award winning film directed by Priya Krishnaswamy, which had its theatrical released on Friday (February 21, 2020).

Director Priya Krishnaswamy is humbled and deeply grateful for the support of the iconic film director.

“Such a gesture is priceless. Our entire team of “Baaram” is overwhelmed by Mysskin sir’s generosity. He is one of the country’s most celebrated filmmakers. It’s heart-melting to be gifted such support by him. The whole buzz about Baaram began with his speech about it at the trailer launch. My deepest gratitude to him for everything.”

Directed and produced by Priya Krishnaswamy and Ardra Swaroop for Reckless Roses, the National award winning Tamil film has been finding tremendous response across all the centres of Tamil Nadu.