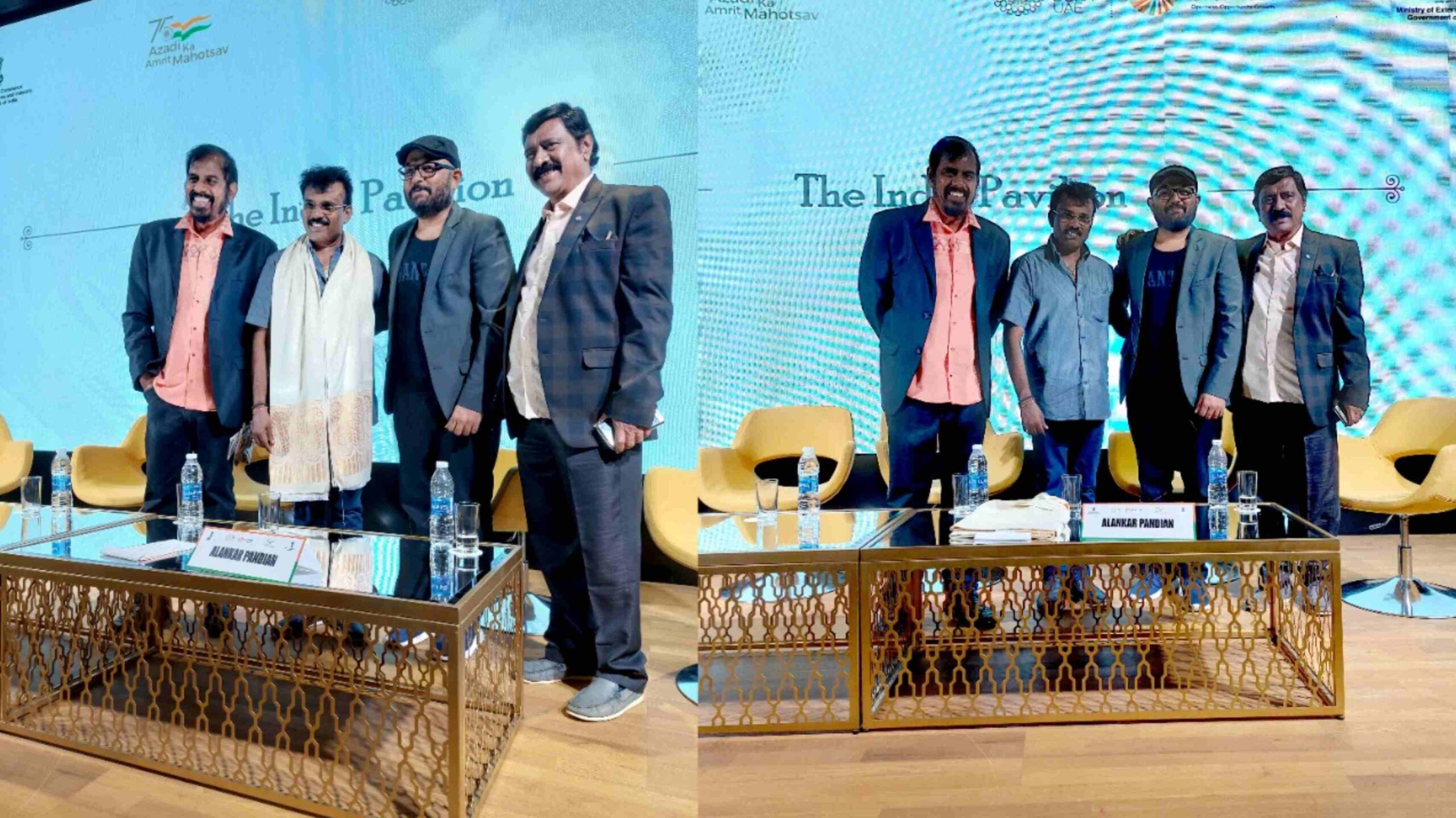 We immensely value the Support of the Press and Media to take further steps in our Film Making Journey.

LAUNCHING AT THE INDIAN PAVILION, DUBAI EXPO 2022 IS LAUNCHING IN 192 COUNTRIES:

We are humbled to announce the Soft Launch of the “Registered Trademark Logo” of Meeran Theatres® – A Chennai based film Production Company and film content development company; launched on the stage of World’s Greatest Event_ Dubai Expo 2020, wherein The Media and Entertainment Fortnight held at the sprawling India Pavilion, the Pavilion that stood majestically as part of 192 Country’s pavilions. It appeared to us as through we launched in 192 Countries. The logo of Meeran Theatres was gracefully launched by the Secretary of I&B Ministry, the Popular and Celebrated Filmmakers, Producers, Distributors, President of the Events and Entertainment organization. They are our Gurus and inspirations who have been in the forefront, leading the film industry way forward. This Logo Launch is a pre-launch to the upcoming company launch along with our 1st Tamil Film; A Coolie-Cop story under Chase-Thriller, Coming-of-age genre with the undertone of Cricket Aspirations during Covid Lockdown

PROFILE OF THE FORTNIGHT EVENT:

The Honourable Ministry of Information and Broadcasting’s Media and Entertainment Fortnight held in Dubai Expo 2020 – Indian Pavilion between 18th and 31st. The fortnight was alive with Film Producers B2B Meetings, Film Writers and Directors Meetings, Film Distribution and Film shooting facilitations, B2G – Collaborations, Exchange of Talents between India and the UAE, the Gulf Countries overall. The Promotional events of Mr.Rajamouli’s RRR, Mr.R.Madhavan’s Rocketry for the Gulf Countries Audiences held at the fortnight stage, indeed it was bustling with the delegates of writers, film directors, actors, producers, distributors, exhibitors, studio producers and policy makers from the Indian and UAE film industries. As a New Film Director and Screenwriter I (Amjath Meeran) the founder – Producer of Meeran Theatres was one of the invited delegates. The Delegation was well received and supported by the Embassy of India in Dubai, Abu Dhabi Film Commission – An Abu Dhabi Govt. agency, Dubai Media City and Twofour54 Abu Dhabi Film Fraternity and Dubai Expo 2020 management. We immensely thank the Ministry of I&B and FICCI for giving us this wonderful Opportunity.

OUR RESPECTED GUESTS OF HONOUR WHO CAME FORWARD TO LAUNCH OUR COMPANY:

The Registered Trademark Logo of Meeran Theatres launched by the Guests of Honour presented herewith. Prior, Founder Amjath Meeran Felicitated the Guests for their immense support.

THE OBJECTIVES OF HAVING THE SOFT-LAUNCH OF LOGO IN UAE:

2. To position our banner as a Global Film Production House

3. To propose to make films in Arabic along with Indian Languages (Tamil, Telugu, Hindi) and English. Our stories were well received by our counterparts, and looking forward to next step

4. To create awareness about Registering the Company for a Trademark

OUR COMPANY LOGO BELIEVED TO BE COUNTRY’S 1ST REGISTERED TRADEMARK:

We are happy yet unfortunate to know that Meeran Theatres is believed to be the first Trademark Registered® Film Production Company originating from the entire Indian Sub-Continent and the Gulf Countries. Yes! It is a taxing process, almost took seven years to get awarded with an R ‘® -certificate’; we applied in 2015 and received in 2022 after winning in the Court. We think “R” mark is vital because (1) It protects the Logo Mark and Word Mark of a company from imitators across the world, also, serves as an umbrella to protect our IPs (Films, Series, Songs, Music) from the copyrights infringers, the pirates. (2) To rightfully battle for our copyrights even after the release of the film. (3) Symbol ‘R’ ® will authenticate the legitimacy as a film production company, its country and place of origin (4) In order to position the banner as an International Production House a Registered Trademark plays a great deal