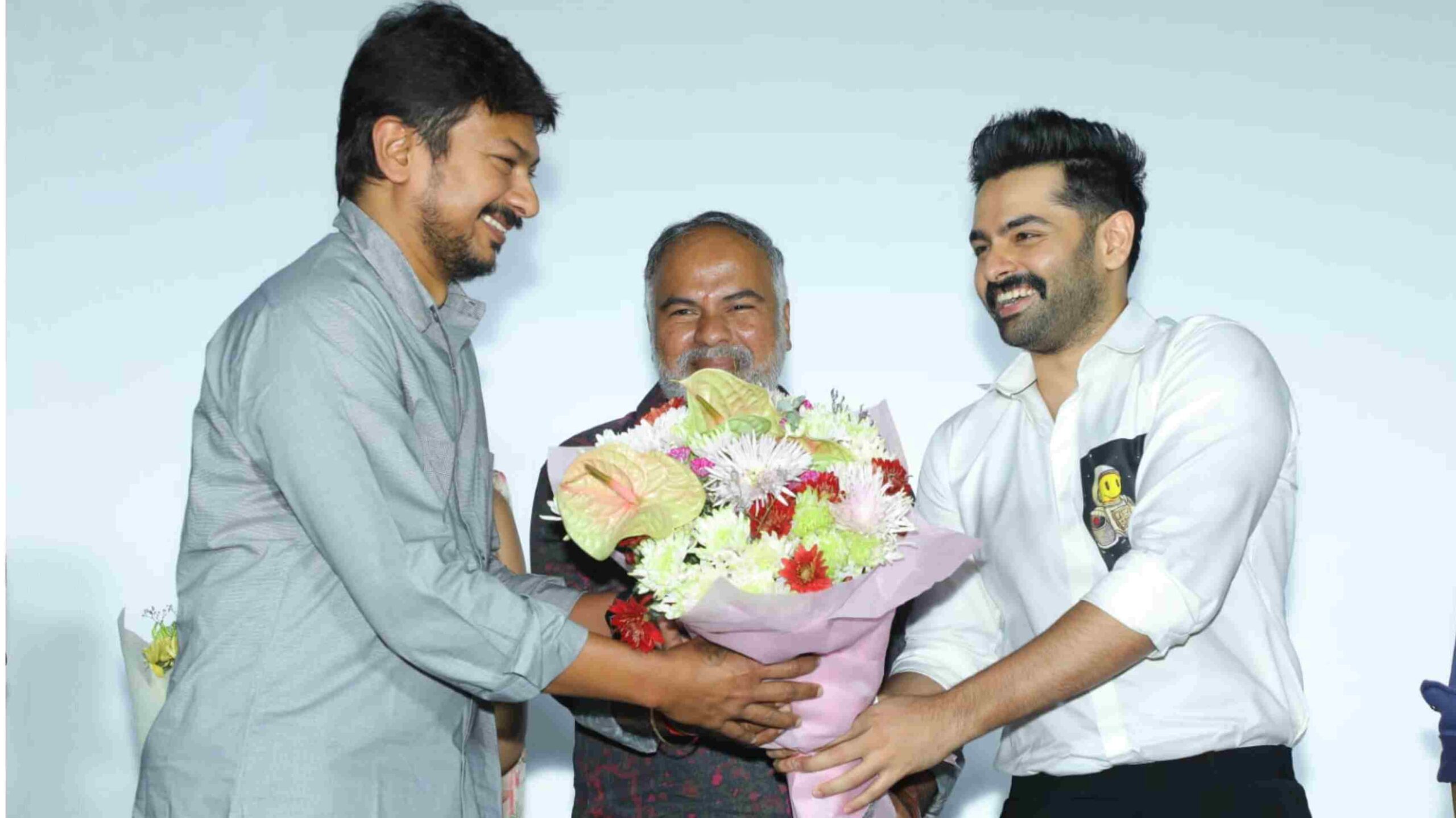 Telugu film industry’s most stylish and happening star Ram Pothineni has collaborated with Tamil movie industry’s top-league commercial filmmaker N Lingusamy for a movie titled ‘The Warriorr’. The film is produced by Srinivasaa Chitturri of Srinivasaa Silver Screen and is presented by Pawan Kumar. Kriti Shetty is playing the female lead role, and the others in the star-cast include Aadhi Pinisetty, Akshara Gowda and many more prominent actors. The first single ‘Bullet Song’ composed by Devi Sri Prasad was launched today (April 22, 2022) in Chennai. Politician-Actor Udhayanidhi Stalin was present as the chief guest. The cast and crew of this film was present during the occasion to interact with the press and media fraternity.

Lyricist Viveka said, “The entire event is spangled with positivity. I thank Udhayanidhi Stalin for making his presence for this occasion. The experience of working in this movie has been great. I have been writing lyrics for the movies of Lingusamy from the time of his debut movie ‘Anandham’. He is still the same person with good heart, but has escalated his efforts. The way, he has crafted every scene is intelligent and artistic. I have written lyrics for all the songs. After completing the recording session, Silambarasan appreciated the song. Choreographer Prabhu Deva sir also shared his appreciations. Music director DSP has become a world class music director. I am sure the movie is going to be a Pan-Indian hit. Ram Pothineni has become my favourite friend. Kriti Shetty is a fabulous performance. This movie is going to be a special one for all of us in the team.”

Writer Brindha Sarathy said, “Warrior is someone, who never gives up at ease irrespective of what the result is. I always believe Lingusamy is an epitome of this definition. I have been seen him from the college days, and he is still the same, battling all odds and facing the challenges. Despite the hits and flops, he is always disciplined about his works. I am so happy and proud to have Udhayanidhi Stalin sir to launch this song. Actor Ram is a successful Telugu actor, who has delivered 18 blockbuster movies. He is such a dedicated artiste and has been my inspiration for acting as well. Kriti Shetty has become a reigning queen in Tollywood, and she is making her debut in Tamil cinema with this movie. Aadhi is playing a fabulous antagonist character in this movie. Devi Sri Prasad is a real warrior. He would keep chatting with us all throughout the day, and suddenly will surprise us with the tunes overnight.”

Cinematographer Sujith Vasudev said, “I have already worked Papanasam, and this is my second movie. It’s been a positive experience to work in this movie. The audience can witness the full energy of Lingusamy, and you will definitely appreciate him as Warrior after the film’s result’.”

Art Director DY Sathya Narayana said, “I thank Lingusamy for giving me an opportunity to work in this movie. Ram is a lover boy, and it’s been a great experience with him. I thank the entire crew for being supportive.”

Actress Kriti Shetty said, “It’s completely positive here. One of my favourite Tamil movies is Paiyaa. I am lucky to be a part of the movie made by the same director Lingusamy. Ram is just a power house talent with lots of energy, and it was infectious. I felt more energy while working with him. Devi Sri Prasad has already delivered a beautiful musical hit with Uppenna, and I am happy to be working with him. I thank Tamil audiences for supporting my debut movie Uppenna, despite of being a Telugu movie.”

Actor Aadhi said, “I really liked the way, Lingusamy sir had sketched my characterization. Usually, cinematographers love shooting heroines, but here, he enjoyed shooting me. The way, my character was developed and shot was really good. I welcome Ram to Tamil cinema. Devi Sri Prasad is a Rockstar, and this is going to be Chartbuster album. Silambarasan has done a fabulous part with this Bullet song, and it’s going to be a super hit. The Warriorr is going to be a blockbuster commercial hit like Run, and Sandakozhi.”

Music director Devi Sri Prasad said, “ I would like to thank Udhayanidhi sir for being here for the launch. I have always admired Udhay anna for being so much supportive in my hard times. I can’t forget the moment, where he extended his complete support during the demise of my father. Lingusamy sir and I wanted to work together for a very long time, and we keep appreciating our works often. I am glad that we are finally coming together in this movie. Lingusamy is a man with good heart, and he always appreciates everyone. Aadhi and myself have been close friends from our childhood days. Our fathers have been blockbuster combination, and together, have delivered lots of hit movies. I am always proud of Kriti success. I welcome her to the Tamil industry. Vivega sir has written peppy songs for this movie. Producer might look silent, but violent when it comes to spending for his production. His passion for movies is insatiable. DOP Sujith sir has done a visual magic for this movie. I welcome Ram to Tamil cinema. Both of us close friends, but I am very much surprised to see him speak Tamil with so much fluency. He is going to dub in his own voice for Tamil. I am sure, Tamil audiences are sure to welcome him. I thank everyone for making Pushpa a big hit. I thank Silambarasan brother for accepting my offer to croon this song.”

Director Lingusamy said, “As Brindha Sarathy told, our sources of poem have been Kalaignar Karunanidhi ayya. His grandson Udhayanidhi sir is such a great human, and he accepted my offer to be here at a single phone call. This ‘Bullet’ song was composed during the time of his Chartbuster Pushpa moment, and has given a fabulous work here. Lyricist Vivega has worked with me from a very long time. He has now made me recover the loss of Na. Muthukumar. The producer of this film, Srinivasa sir has been so much generous. He has spent Rs. 3Cr for this single song. He is like my brother and will be happy to be associated with him in many projects for years to come. When I approached Aadhi for the role, he took some time to respond. We even thought of getting Nivin Pauly for this role. However, Aadhi surprised me after a month time by appearing in a new look that he developed with self interest. Kriti Setty has exerted lots of efforts for her performance and dancing. And now to see the final output of the song, it’s amazing to her dancing skills. Sujith Vasudev is a combination of Nirav Shah and Jeeva sir. I have worked many artistes, but very few keep up the timing. After Mammootty and Madhavan, Ram is the actor with the discipline and dedication.”

Producer-Actor Udhayanidhi Stalin said, “When Lingusamy sir initially invited for this event, I told him that I had to give my oration at parliament. He then postponed the event for today. Lingusamy sir is a real warrior. During the second wave of Corona, he had contributed a lot towards the needy. I would like to thank him for this gesture now. I was supposed to work with Lingusamy-Vishal-Harris Jayaraj combination earlier, but it didn’t happen. But Red Giant Movies will be surely collaborate with Lingusamy soon. When Kriti Shetty came here, I asked everyone if she is fluent with Tamil, and the answer of ‘No’. But she surprised me with the local slang and even whistled. I think it’s all Bala sir’s training. I am meeting Ram for the first time, and both of us have become close friends in just 5 minutes of interaction. I didn’t know that he spent his childhood here in Chennai. I request producer to screen the movie for me when it is ready. I wish the entire team for the grand success.”

Actor Ram Pothineni said, “I thank Udhayanidhi Stalin sir for  making his presence here. Usually negativity spreads faster, but Udhayanidhi sir’s positive works and deeds are getting acclaimed in Telangana and Andhra. Devi Sri Prasad and myself  together have delivered Chartbuster albums in Telugu, and this one is going to be more special. I thank producer Chitturri sir for spending sumptuously for the song. Bose sir took care of me very well during the shooting. Sujith sir has created fantastic visuals for the song. Kriti Shetty looks so pretty and cute like kid while doing the expressions. Aadhi brother’s character is going to be an excellent one. After a movie in Telugu, he became a massive hit. He stopped acting as antagonist as he got lots of hero offers. But I am so happy that he accepted to be a part of this movie. I don’t know what to say about Lingusamy sir. The first movie that I saw in Chennai, came out of the theater, and then watched repeatedly was ‘Run’. I always desired to make my Tamil debut for a very long time, and finally it is happening with Lingusamy sir’s movie. I thank everyone for coming here and making this event successfully.”

Ram Pothineni’s Bi-lingual The Warriorr to release on July 14.

RAPO’s The Warriorr to have global release on July 14