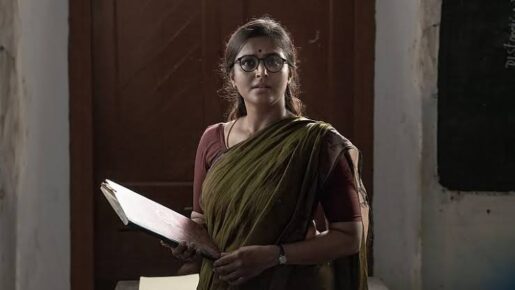 Ramya Nambeesan, known for her roles as a child artist in over 60+ films in the Tamil & Malayalam industry, recalls fond memories of portraying the role of Lakshmi in the upcoming Netflix anthology “Navarasa”. The anthology features some of the best talents from Tamil cinema. Netflix will unveil stories showcasing different forms of human emotions through the upcoming anthology Navarasa globally on August 6, 2021.

Talking about her character and experience working with Filmmaker Priyadarshan, Ramya Nambeesan said, “I was a little perplexed when they told me I had to represent both the young and old versions of the character. I wasn’t sure if I could pull off old age. Priyadarshan sir engulfed every scene with warmth and made me feel comfortable. Working with him was a truly fascinating experience for me.”
Navarasa is an upcoming Indian anthology that showcases nine different emotions of love, laughter, anger, sorrow, courage, fear, disgust, surprise, and peace through nine beautiful tales. The film has been produced by Justickets which is co-founded by Mani Ratnam and Jayendra Panchapakesan. Navarasa will premiere exclusively on Netflix across 190 countries on August 6, 2021.

About Netflix:
Netflix is the world’s leading streaming entertainment service with over 209 million paid memberships in over 190 countries enjoying TV series, documentaries, and feature films across a wide variety of genres and languages. Members can watch as much as they want, anytime, anywhere, on any internet-connected screen. Members can play, pause and resume watching, all without commercials or commitments.

IT WAS A GREAT JUGAL BANDI: PARVATHY THIRUVOTHU ON WORKING WITH SIDDHARTH.

SIDDHARTH TALKS ABOUT THE MEANING OF INMAI .

NETFLIX ANNOUNCES THE RELEASE DATE OF THE MUCH AWAITED ANTHOLOGY NAVARASA