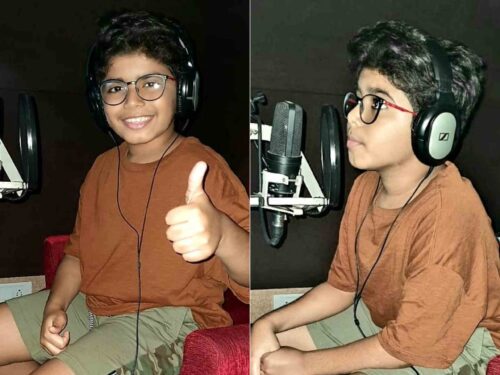 The legacy of artistic essence has been beautifully carried and nurtured across three generations of actors – Vijay Kumar, Arun Vijay, and now Arnav Vijay. The news about the grandfather-father-son trio sharing the screen space in a movie produced by Suriya’s 2D Entertainment created a sensation. With the shooting already completed, Arnav Vijay started dubbing his portions today. The team affirms that the postproduction work is nearing completion.

Written and directed by Sarov Shanmugam, this kids-centric movie will be a 100% family entertainer. The entire team believes that the film will be savouring the tastes of universal audiences and will be a decorous stress buster. The entire shoot of the movie happened across locales of Ooty and is co-produced by Rajsekar Karpoorasundarapandian & S.R.Ramesh Babu of RB Films. Nivas K Prasanna (Music), Gopinath (Cinematography), Mega (Editing), Michael (Production Designer), Vinothini Pandian (Costumes) are the technicians.

Actor Arun Vijay AV 31 movie shooting is over and dubbing work has started!

Actor Arun Vijay is really elated in having completed his one of the dream projects with director Arivazhagan tentatively titled as #AV31.