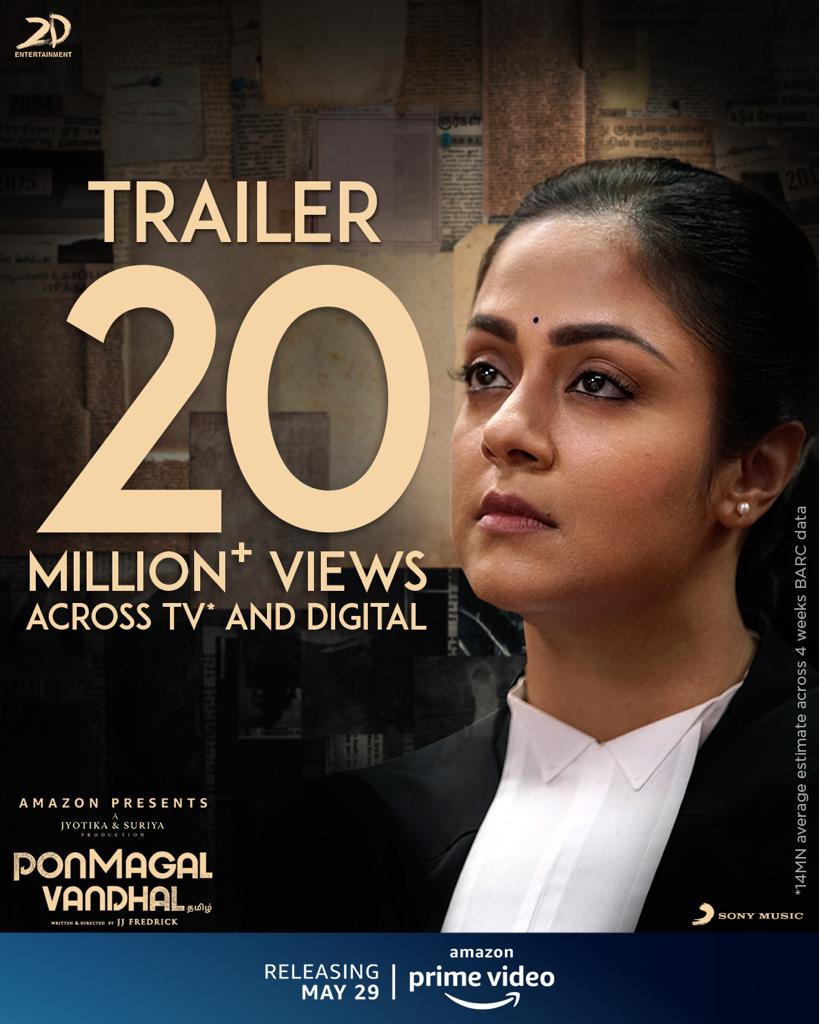 Continuing with its many strokes of firsts, Amazon Prime Video released the trailer of the much-anticipated Tamil film, Ponmagal Vandhal, in a grand manner. With an aim to reach out to audiences across the South Indian markets, the service released the trailer of its first-ever direct-to-stream worldwide movie premiere, across 31 Tamil TV channels, simultaneously on 21st May at 8:43 pm (IST). Touted as one of the biggest ever TV trailer roadblock, a potential base of estimated 14 million viewers* watched the trailer at once on their television during the primetime mainly across Tamil Nadu and Puducherry. Popular TV channels such as Sun TV, KTV, Star Vijay TV, Sun News, CNN News18 Tamil, ZEE Tamil and more aired the trailer of the upcoming film featuring the celebrated actor Jyotika. In addition to it, the trailer of Ponmagal Vandhal also received an overwhelming response on the official YouTube page of Amazon Prime Video India with over 6 Million views in the first 24 hours after its launch.

*Based on average estimate across 4 weeks BARC data.

Ponmagal Vandhal is a gripping legal drama that follows the story of an honest lawyer who is attempting to free an innocent woman, wrongfully convicted. This riveting tale revolves around the story of a resident in Ooty named ‘Petition’ Pethuraj who reopens a case from 2004 that involves a serial killer ‘Psycho Jyoti’ who was convicted for kidnapping and murder. Venba, his daughter and a passionate lawyer, weaves through the loopholes to unveil the truth. The case is a devious maze where nothing is what it seems on the surface. Condemned to be hungry for fame and publicity, Venba stands for justice despite the challenges that are thrown at her.

Produced by 2D Entertainment, the legal drama features a power-packed cast that includes Jyotika, Parthiban, K.Bhagyaraj, Thyagarajan, Pratap Poten and Pandiarajan. Ponmagal Vandhal will be available exclusively for Prime members to stream from May 29 in more than 200 countries and territories.

#PonmagalVandhalOnPrime, premiers on May 29 only on Amazon Prime Video