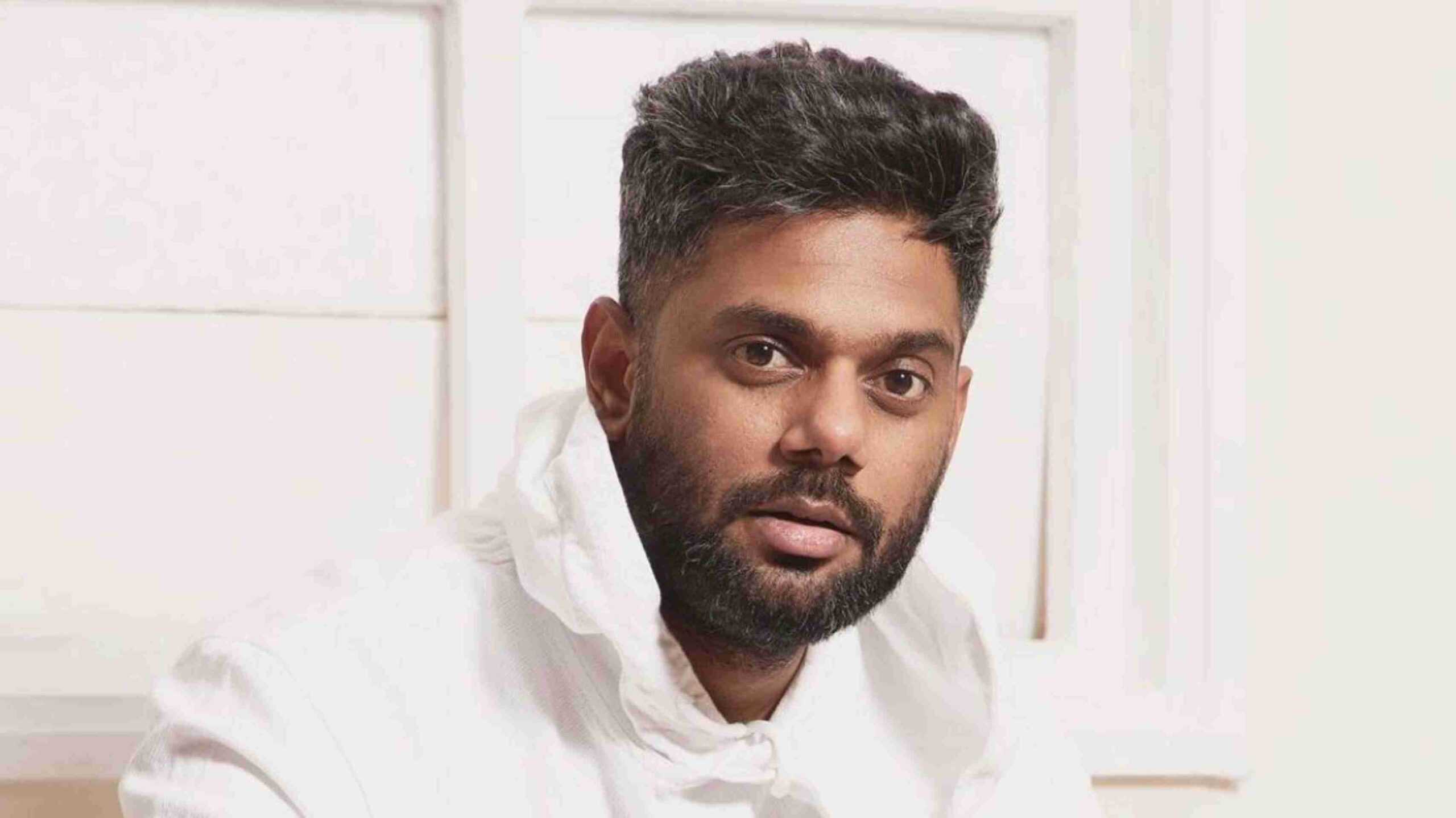 Geetha Cine Arts, owned by reputed producer Allu Aravind, which is one of the most well-esteemed production house in the Telugu film industry is gearing up for the worldwide release of Urvasivo Rakshasivo tomorrow. The film features Allu Arjun’s elder brother Allu Sirish, who won incredible praises for his performance in Tami movie ‘Gauravam’ plays the lead role. Thupparivalan & Namma Veettu Pillai fame Anu Immanuel plays the female lead role, which is directed by Rakesh Sashi.

Achu Rajamani, who shot to fame for his spellbinding musical score in the Tamil movies like Kolaiyudhir Kalam and Goli Soda 2 , Maalai pozhudhin Mayakathilaey and Urumeen is composing music for this movie. This happens to the Telugu remake of Blockbuster Tamil movie ‘Pyaar Prema Kadhal’ produced by Yuvan Shankar Raja, who composed music for this film as well.

While the film is hitting screens tomorrow, music director *AchuRajamani* shares his working experience with this project, his journey in the music industry.

*Can you share us how you got the opportunity to compose music for Urvasivo Rakshasivo?*

The film’s hero Allu Sirish and myself have been close friends from the year 2015. I got the opportunity to compose music for this film only through him. If I have to point out the great quality of Allu Sirish, he is a man of clarity. Be it choosing the script or the way, he talks to you, there is clarity in everything. Sometimes, even before he answers or converses with us, he has a clear state of execution . He is much alike his father Allu Aravind sir . Even when we are conversing about personal things, there wouldn’t be any mockeries and pulling our legs, instead, there would be a strong clarity and a legit conversation .

*Was there any pressure because of Urvasivo Rakshasivo being a remake of Yuvan Shankar Raja’ movie?*

I have watched Pyaar Prema Kadhal for more than 5 times, and it was an amazing project with the brilliant musical score of Yuvan Shankar Raja. However, we have remade this movie as a fresh project. Precisely, we didn’t want to spoil the nature and beauty of original version. Significantly, we have tried giving the best efforts in remaking and delivering good music. We haven’t recreated any of the musical scores from the original Tamil version. There are five songs in this movie, among which a couple of them are already trending in audio charts, thereby increasing the expectations over this movie and the movie is doing really well .

*Can you share us about the working experience with director Rakesh Sashi?*
Director Rakesh Sashi has a special and unique perspective of seeing things. His family has owned music stores, and being inclined to this scenario from childhood, he has a sound knowledge about music. Since, I clearly recognized his needs and expectations, it was easy to deliver the music accordingly.
I had complete freedom to compose songs and background score for this movie. During the rerecording session, both director Rakesh producers Dheeraj and Vasu gave me lots of encouragement and kept me enlivened. Even the film’s producer used to tell them, “Let him compose music in his way, and you try to take the best out of it.” Such was his lovely gesture. Even Sirish was kind enough to come sot with me during jamming sessions whenever I needed him . That’s thoughtful of him .”

*Your experience of working with Allu Sirish”
This might sound surprising to you all. I and Allu Sirish together used to create fresh and new tunes to make use of it in the near future. It was really a great experience working with him. Just like his father Allu Aravind sir said, Sirish has so far acted only in the roles as an Urban Jubilee Hills Boy. This is the first time, he has acted as a middle class boy in this movie, and it was a big challenge for him. But to our surprise, he has underplayed a lot to befittingly look perfect for the character. Usually, I would openly speak about my like and dislikes to him. Maybe, it could be the reason, why I am not able to progress in the industry. In my honest opinion, Allu Sirish has done a remarkable performance in this movie. He has a sound knowledge about the script. He was the one, who chose the script of Arya for his brother Allu Arjun. Moreover, he has a great comedy timing sense . It’s in his DNA and am not surprised by it . Director has made use of this quality in the movie very well. The audience will see a new-dimensional Allu Sirish in this movie.
*Reason behind your decision to stay away from social media.*

In the current situation, Social Media is making a whole lot of bigger impact on everyone. There are many benefits , positives out of it. It has paved way for the success of many actors and music directors. However, the platform didn’t go well for me as I couldn’t relish or enjoy anything in social Media . There is multiple music for one single reel by 100 people . and I am not able to enjoy them. After a certain extent, it becomes a great hatred for me. Furthermore, it becomes a ritual and mandatory stuff to keep ourselves in trending, which urges us to do one or the other thing. Such scenarios leave us in deep pressure. We all become bounded to one intense situation to do something to keep us trending.

On the other hand, I don’t like using mobile phones for a long time, which became an additional reason behind not using the social media. It might be an intellectual decision of mine as well or even the most foolish decision ever . However, if the situation demands in the near future, I will definitely prepare and get into it but with clarity .

*It looks like there has been a long gap in the Tamil movie industry.*

Currently, I am composing music for Vijay Antony’s Mazhai Pidikatha Manithan, Naarkara Por and Saamaniyan. Talks are going on to create third part of Goli Soda as well. Furthermore, a couple of projects are in the pipeline as well. Among all these projects, Naarkara Por will definitely get noticed by everyone. I am glad to be working with Vijay Milton sir in Mazhai Pidikatha Manithan after Goli Soda-2. Vijay Milton was the main reason behind the success of Pondatti song and background score in Goli Soda-2, for he gave me complete creative freedom.

*How was the experience of working with Vijay Antony?*

More than being a great actor and music director, Vijay Antony is a man with golden heart and great humanity. Being a music director, he was so keen on not discussing anything about music with me as he clearly knows that giving space to a technician is key . Moreover, I have composed music for Mazhai Pidikatha Manithan perceiving Vijay Antony as the hero in this movie.

*When will you be composing music for big movies?*

When someone challenges me, things become more interesting for me. Only then, I will be propelled to work harder and progress. The works we do should become our identity. Those works alone will bring more work for us. When such offers come my way, I will definitely work with them.

*About composing music for a song in Saamaniyan written by cinematographer Ravi Varman.*

He is a great writer, but he is well-known as a cinematographer. He has written so many books. He has a great fervent love for Tamil. I am very glad to have composed music for a song that has lyrics written by him.

* It looks like you have got into production of short films.*
It’s true that I am into the production of short films. My first production titled ‘Hit Wicket’ is directed by my best friend Kabaleeswaran. I have written the story, screenplay, and dialogues for this movie. Ananth Nag is playing the lead role in this movie. Priya Laya, who playing the female lead role of CV Kumar and Santhanam. I have an awesome team working in the project . Let it be the other actors , cinematographer or the editor , they’ll shine and that’s my aim to make sure they shine as well . My intention is to create new-fangled short films rather than churning out the stereotypical ones. Anyone with such ideas can approach me anytime.”

The first look of this film was released by both Aadhi and Nikki Galrani. Music director GV Prakash Kumar released the character posters of this movie. I thank them for all their lovely gesture . They’re close buddies of mine and I usually don’t seek help from other film celebs cuz I am shy to ask but now I have to keep my sentiments aside cuz that’s how the world has become and we need to make sure we are being recognised and friends like Aadhi , Nikki , GVP and many more are very supportive and am humbled by the way they are . The trailer will be released soon. We are planning to release the film by end of November. We will be soon starting the preproduction works for our next short film. My intention is to create new-fangled short films rather than churning out the stereotypical ones. Anyone with such ideas can approach me anytime.

About composing music for a song in Saamaniyan written by cinematographer Ravi Varman..

My first shoutout to director rahesh and producer mathi sir . It’s my second venture with them and they are such passionate film enthusiasts. If not for them I would have not landed at Ravi Varman sir’s doorstep . He is a great writer, but we all know him as this magical cinematographer. He has written so many books. He has a great fervent love for Tamil. I am very glad to have composed music for a song that has lyrics written by him.

Actor Allu Sirish has released the preview poster and announces his next film.