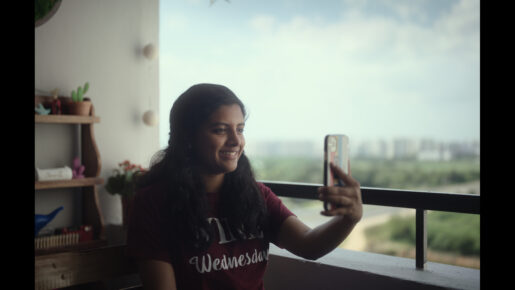 Lijomol Jose touched the hearts of everyone who watched Amazon Prime Video’s top-ranking film of 2021 Jai Bhim. Her soul-stirring performance as Senggeni, one of the key characters in the film, made her an unmissable star garnering mass as well as critical acclaim. After the success, Lijomol is all set to bring another striking performance with Amazon Original Series Putham Pudhu Kaalai Vidiyaadhaa…

Looking at the trailer of the 5-episode Tamil anthology, one can see how effectively Lijomol has showcased her prowess as an actress. In the episode Loners, directed by Halitha Shameem, Lijomol plays Nalla, who goes through a break-up during the pandemic and serendipitously meets Dheeran (played by Arjun Das) at a virtual wedding. What follows is a series of deep meaningful conversations that enables them to develop a bond virtually and be alone together.

All praises for her actress, director Halitha shares her thoughts on Lijomol and how she became a part of her vision, “I liked her performance in Sivappu Manjal Pachai. Dir sasi, Dir Gnanavel, actor Manikandan all the three were in praise of her and Manikandan particularly told me that I should work with her as she was way too sincere. And, I liked the way she presented herself in an award event we went together. She was simple and down to earth, more relatable! And, when I approached her for the role, she read the script and enacted few scenes, recorded on her phone and sent me the video clips. Tears started rolling as I watched those! I was truly amazed at her performance. Loners was recorded in sync sound. I didn’t even do a bit of ADR with her! Her pronunciation and rendering of lines were all so perfect.”

Talking about her reaction to Lijomol’s performancs in Jai Bhim, the director shares, “After watching Jai Bhim, I felt even more proud of her, for all the hard work and effort.”

It will be interesting to see how effortlessly Lijomol has transformed on-screen and the length she can go from portraying Senggeni, a rugged village girl to Nalla, a girl next door in Putham Pudhu Kaalai Vidiyaadhaa….

Each story in Putham Pudhu Kaalai Vidiyaadhaa… is standalone and yet they are all bound together by the theme of personal discovery of hope and new beginnings through human connection. These are stories of optimism, love and second chances, set in the second Covid-19 lockdown. The stories feature Aishwarya Lekshmi, Arjun Das, Dhilip Subbarayan, Gouri G Kishan, Joju George, Lijomol Jose, Nadiya Moidu, Nirmal Pillai, Sananth, and TeeJay Arunasalam, and are directed by Balaji Mohan, Halitha Shameem, Madhumita, Richard Anthony and Surya Krishna.

Following the success of the first edition, Putham Pudhu Kaalai Vidiyaadhaa… promises to enthrall audiences with a heartwarming narrative that celebrates the spirit of resilience and grit in the face of adversity. The five-part anthology is set to premiere this Pongal, 14 January on Amazon Prime Video in India and more than 240 countries and territories worldwide.