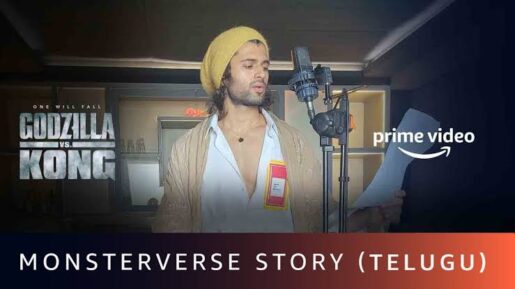 Amazon Prime Video has a treat in store for Fans of Godzilla vs. Kong Launches ‘Legends of the Monsterverse’, a 3D animated video narrated by Vijay Deverakonda (in Telugu) and Dulquer Salmaan (in Tamil).

The epic blockbuster Godzilla vs. Kong launched on Amazon Prime Video in English, Hindi, Tamil and Telugu, a few days ago much to the delight of fans of the franchise. If you think you know everything there is to know about this franchise, you may be surprised. The streaming service today shared its first-ever 3D animated video titled, ‘Legends of the Monsterverse’, with a narration by none other than Vijay Deverakonda (in Telugu) and Dulquer Salmaan (in Tamil) to further fuel the excitement amongst fans.

The animated video captures the journey and the epic rivalry of two of the deadliest monsters ever – Godzilla and King Kong. In this video, the superstar actors who are fan-boys themselves, give fans of the franchise an overall picture of the Monsterverse with a narration in the style of a grand old tale. They share some really cool trivia on how the two monsters came to be, where they are, and where they are headed in this rivalry.

Here’s Vijay and Dulquer sharing with you a few facts that you may not already know.

Your beast boy is back as the narrator for The Legends of the Monsterverse in a fun #collaboration with @PrimeVideoIN#GodzillaVsKong
Watch Now in Telugu. pic.twitter.com/sYbrJs3aYm

Just went ahead and did a fun #collaboration with @PrimeVideoIN to narrate the epic rivalry of the Legends of the Monsterverse in yours truly’s voice for #GodzillaVsKong. Watch Now in Tamil ! pic.twitter.com/DCgCCNtHiO

Get ready to witness the battle of the beasts as Amazon Prime Video announces the digital premiere of Godzilla vs. Kong in Hindi, Tamil and Telugu this August 14th.

Ahead Of The Highly-Anticipated Drishyam 2, Amazon Prime Video takes fans down memory lane.