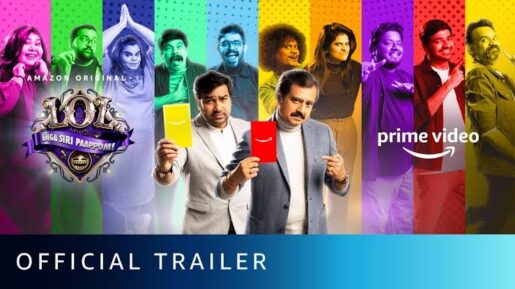 Binge all 6 episodes of this uproarious, unscripted comedy-reality show from 27th August across 240 countries and territories on Amazon Prime Video
Produced by SOL Production Pvt Ltd, hosted by Padma Shri actor and comedian, late Vivekh alongside Shiva, the series will feature 10 celebrated Tamil comedians and entertainers under one roof

NATIONAL, INDIA, 17 August 2021 – Amazon Prime Video, today, unveiled the official trailer of the all-new Amazon Original Series LOL: ENGA SIRI PAAPPOM, the Tamil version of the much-loved international comedy format LOL. The series unites the best comedy entertainers of the Tamil industry under one roof in a unique setting. In the 6-episode unscripted series, Maya S Krishnan, Abhisek Kumar, Premgi, Harathi Ganesh, RJ Vignesh, Sathish, Pugazh, Powerstar Srinivasan, Baggy (Bhargav Ramakrishnan), and Syama Harini engage in a battle of wits as they face their toughtest challenge yet – to be the last one laughing! The 10 comedians are put together in one space for six hours, under lock and key, with one weapon – their humor and one shield – ‘their poker face’. The objective is simple, to make the others laugh while maintaining a straight face themselves. The show is hosted by the much loved Padma Shri awardee and legendary comedian Late Vivekh and renowned actor Shiva. Prime Members in India and across 240 countries and territories can binge-watch the six-episode series starting 27th August, 2021 exclusively on Amazon Prime Video.

Here’s what the judges of Amazon Prime Video‘s COMICSTAAN SEMMA COMEDY PA, feel about what makes it special.