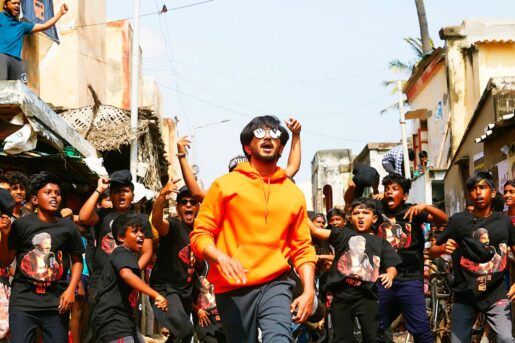 All Dulquer Salmaan fans who have been eagerly waiting to hear the actor sing in Tamil can now rejoice! As a special treat to the dashing actor’s fans, the makers have released the lyrical video of his rap song Achammillai from the upcoming film Hey Sinamika . The lyrics by Madhan Karky are thought-provoking and it highlights a strong message not only to youngsters but to the parents as well while composer Govind Vasantha has composed a very fast rap number which is sure to bring the listeners hooked to this track.

Talking about his thoughts while scoring the song, Govind Vasantha says, “When I was composing this song a couple of years back, at that time, I had not yet done a proper rap song in my career until then. So it was a big challenge for me to compose this song and hence I was determined to do a good job. I decided to use an amalgamation of some rustic elements, chorus and introduce some unique sounds in a sort of crazy way. I wanted the song to sound very rich. Brinda master had also wanted the song to be a dance-oriented song. So it could not be just a content oriented rap song. It also had to have foot tapping music. These were the focus points I had when I started composing this song.”

Produced and Presented by Jio Studios, associate producer Global One Studios, Hey Sinamika is slated to release in cinemas on 25th February 2022.

Actor  Dulquer Salmaan records a rap song for Hey Sinamika in just One and Half Hours.

Amazon Prime Video has a treat in store for Fans of Godzilla vs. Kong Launches ‘Legends of the Monsterverse’, a 3D animated video narrated by Vijay Deverakonda (in Telugu) and Dulquer Salmaan (in Tamil)..