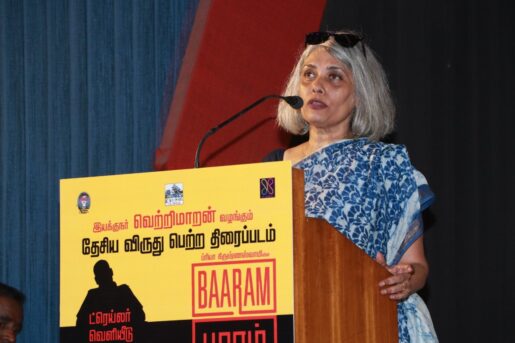 The National award winning film ‘Baaram’ is all set to have a worldwide release on February 21, 2020. The film stars around 85 new faces performing important roles. Directed by Priya Krishnamoorthy, Vetrimaaran’s Grass Root Film Company and SP Cinemas is releasing the movie.

Producer Kishore, SP Cinemas said, “I am so happy that Vetrimaaran sir offered me an opportunity to release this film. It’s a film that is meant for all and I am sure it will be a groundbreaking showpiece, which has already won the hearts of National and International audiences.

Ardra Swaroop, Reckless Roses said, “Being a Mumbaikar, I was completely surprise to see such a story from my mother. At the same time, there were many things to learn from it. Apart from this, the excellent performances by artistes made me awestricken. I wanted to be a part of such an amazing film, where it imparts a valuable thought of taking care of aged people with lots of love. I am happy to be associated with my mother in this film..”

Director Priya Krishnamoorthy said, “We made this film at a shoestring budget, but were really happy with the National award that was entitled for us. Thanks to directors Ram sir, Vetrimaaran sir and Mysskin sir for making this happen. I am thankful to actors Sivakarthikeyan and Vijay Sethupathi, who stepped forward amidst their busy schedules and supported this film.”

Director Ajayan Bala said, “When Baaram got National awards, I criticized writing on my social media page stating that he is disappointed for other worthy movies not getting it. It was such a mistake to comment on a film that I hadn’t watched. Now I apologize to both the director and entire team for making such citations. This is a film that will change our perception towards life, especially towards our parents. The aged people are in a state of life, where they can’t even share their pains and problems.”

Director Ram said, “A film’s quality can been judged good and bad based on the National awards. We found ‘Baaram’ to be a good movie and winning National awards has become an additional advantage for us to promote the film. There’s nothing called art and commercial cinema in Tamil Nadu as the audiences here are interested to watch all kinds of movies. I am sure Baaram will find excellent results both commercially and critically in Tamil Nadu.”

Director Vetrimaaran said, “I haven’t done anything for this film. Director Ram is the major reason behind this film getting its release now. He was the one to propel me to get associated with this film. Only my banner’s name of Grass Root Film Company has been included or else the entire hard work is from SP Cinemas, who are releasing this film. Both mother Priya Krishnamoorthy and her daughter Adra are revolutionaries. They gave their best into making a unique film that doesn’t belong to their nativity. They didn’t make the film alone, but got National honours and now they are giving their best fight making a best release for this him.”

Director Mysskin said, “Director Ram rang up and told me that someone has made a film that we all desired to make for years. With a blind hope on Ram, I happened to meet the film’s director and little taken back doubting is it really true that she has made such a film. Moreover, when Ram told me that Vetrimaaran is coming forward to release this film, I furthermore got doubtful, but I was proved wrong while watching the movie. It was like slapping me, where I had a desire to make such movies and still not accomplished with it. In fact, I went to watch the movie with a headache and as the drama started, it gradually started fading away. I couldn’t go for a blink for it involved so many emotional moments. I can assure that Baaram isn’t just a movie, but an enlightening piece of work, which will draw you close to your parents. While looking into the future, we all forget about our parents, who raised us and that includes me, who never looked back at them as I was filled with ambitions. Baaram will be a life changing experience for all. As a tribute to this film, I want to stick posters for this film in at least 20-30 places across Tamil Nadu.”