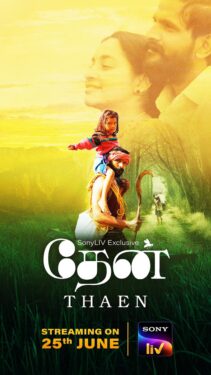 Bringing riveting and pertinent stories from India has been a constant endeavor by SonyLIV, which has been consistent in strengthening its southern content slate. Launching yet another compelling narrative, the platform is all set for the OTT release of the award-winning film ‘Thaen’, a story that highlights the fierce realities of the society. It traces the journey of a young, rural and uneducated beekeeper who battles insurmountable challenges to save his wife from a rare disease. Directed by Ganesh Vinayakan and Produced by Ambalavanan.B, Prema.P & AP Productions, Thaen has been widely showcased at film festivals and has scored over 40 nominations. The movie was one of the two Tamil films which were selected at the Indian Panorama 2020. Thaen is also feted at the 11th Dada Saheb Phalke Film Festival, Delhi NCR, India, Cult Critic Movie Awards 2020, New Delhi Film Festival, Ayodhya Film Festival, Ayodhya 2020 amongst others.

Thaen revolves around the lives of Velu (Tharun Kumar) and Poongodi (Abarnathi) who are living a seemingly happy life, with their daughter in a remote village on a hillside. In an unfortunate turn of events, Poongodi falls ill and is later diagnosed with a terminal disease. Velu struggles to get medical support for Poongodi as they are denied access to good healthcare for lack of valid documents or means to prove their citizenship. Hard-hitting dialogues and scenes of the film question how bureaucratic inefficiency and lack of medical infrastructure is shaping the reality of the society. The film drives a social message which is sure to hit the right chord with the audience. Apart from Tamil, this master piece will be available in Malayalam, Telugu and Kannada

Ganesh Vinayakan, Director
“The plight of an uneducated man struggling for his rights, this is the reality of many… ‘Thaen’ brings to fore his struggle in a relatable story telling. The film is based on true events, relevant in today’s times and I am sure the movie will touch the hearts of many.”

Tharun Kumar, Actor
“I am glad to be a part of such an amazingly scripted film which delivers a strong message. I am sure it creates an impact on all, for the right reasons. It was a pleasure working with the cast, crew and a hard working team. I hope with the OTT launch on SonyLIV, the movie crosses boundaries and reaches millions across.”

Ashish Golwalkar, Head – Content, SET and Digital Business
‘Thaen’ is a carefully crafted tale that delves into a subject rarely talked about in cinema. Through these gripping and informative stories of india with real-life relevance, our goal is to resonate with the audience and showcase content which has the power to shift perceptions.”

Thaen will be streaming from on 25th June exclusively on SonyLIV

SonyLIV is the first Indian premium Video on demand (VOD) service by Sony Pictures Networks’ (SPN) providing multi-screen engagement for users on all devices. Launched in January 2013, the digital streaming player is home to 24 years of rich content from the library of Sony Pictures Networks India (SPN) with over 40,000 hours of programming. SonyLIV subscribers get exclusive access to key sporting events from across the globe, the latest Hollywood Shows, Originals, 18,000+ hours of TV Shows, LiveTV and Kids content.

SonyLIV has partnerships with key International studios – SPE Films, Lionsgate and iTV, which allows its subscribers exclusive access to award-winning shows like, Seinfeld, Power, The Good Doctor and Mr. Mercedes. The platform also hosts celebrated Hollywood shows to its library like LA’s Finest S2, On Becoming a God in Central Florida, Alex Rider, For Life, Lincoln Rhyme, War of the Worlds, Commons and Indebted, 1917 amongst others.
For more information, log onto www.sonyliv.com

The network is recognized as an employer of choice within and outside the media industry. SPN is a recipient of several awards, including India’s Best Companies to Work For 2020 by the Great Place to Work® Institute, India, ‘Aon Best Employers India’ awards in recognition of SPN’s unique workplace culture and exceptional people practices, consistently ranking amongst India’s Top 10 Companies with Best Health & Wellness Practices by SHRM & CGP Partners and listed by Working Mother & AVTAR as one of the 100 Best Companies for Women in India.

To solve the next murder, read between the lines! SonyLIV and Applause Entertainment announce the launch of their first Tamil original ‘Iru Dhuruvam’

Director Ganesh Vinayagan has been Nominated for the 51st International Indian Panorama My “Thaen” Film Award.

AVM Productions forays into OTT with Tamil Stalkers; partners with SonyLIV for the thriller: